I divide the types of thinking that a chess player uses during a game into two categories:  Reasoning and Intuition.

Perhaps we should start with some definitions.

Intuition is the mode of thinking that relies on experience, gut feel, instinct, rules of thumb.  Intuition is not exact calculation; instead it is a feeling about a move or position.


How Computers "Think" while playing chess.

To explore the ideas of reasoning is and intuition, I first need to take a look at how computers are programmed to find moves.    This is an overly simplified explanation, but it covers the important points.

The computer first generates a tree of variations.  For my example, the computer will only look 2 moves deep for each player, and will only look at 2 moves at each branch.  In reality, the programs will look at more moves and will look deeper in positions that have forcing continuations. 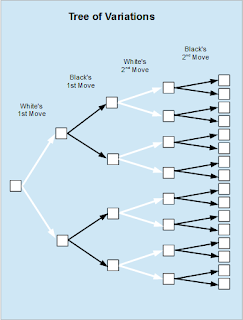 Next the program will calculate a value that represents an evaluation of the position for each of the final positions.  This score will be based largely on the material balance, but also positional considerations.  For my example I just generated random values between -9 and 9.  A negative score is in Black's favor, and a positive score means White is better. 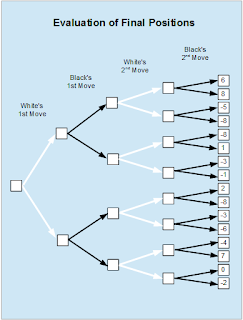 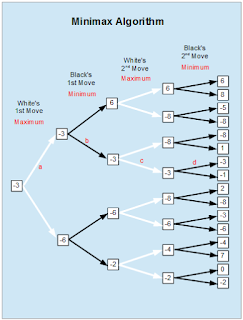 By applying the Minimax algorithm, the program calculates that the best move White can make is the one marked 'a' above, which has a score of -3.  The alternative has a score of -6 which is even better for Black.   Black's best response to move 'a' is move 'b'.  White's best 2nd move is 'c', and Black's best second move is 'd'.


Now back to Human Thinking

I showed you all that in order to discuss how reasoning and intuition are used when humans play chess.

While generating the "tree of variations" in their heads, humans cannot possibly consider every move at every branch.  Only a limited number of moves can be considered, and to decide which, we use intuition.  Rules of thumb help, which guide use to look at checks, captures and treats.  Experience can play a role if the position is similar to other positions we have seen before.  And gut feel can guide us into considering certain moves.  Intuition also guides us in how deep we follow each line.  Much like with the computer program, we use the rule of thumb to look deeper into lines with forcing moves.

Evaluating the positions at the end of each branch also involves intuition.   We humans don't have the processing power to do a computer-like evaluation, but we can estimate how much we value differences in material, pawn structure, piece activity, weaknesses, etc.  Rules of thumb are useful for the material imbalances.  Instinct may tell us that piece activity may compensate for a weak pawn.

The human equivalent of the Minimax algorithm is where we use reasoning.  Visualizing the possible moves at each branch and assigning mental scores is where we can use pure calculation power.  As I mentioned above,  reasoning is hard work.  It takes mental discipline to do a thorough evaluation of the important moves and the opponent's replies.


The role of Time

Reasoning also takes a lot of time.  You may notice that at long time controls, you will use reasoning much more than you do at 5 minute chess where it is mostly intuition.  Something else to consider is that your reasoning will often benefit by spending more time,  but your intuition will not.


Improving your Reasoning and Intuition

Reasoning is a skill, and is improved by practice.  Solving tactical positions and working through endgame studies are good ways to improve your reasoning.

Intuition is based in part on your knowledge and experience,  so reading books on strategy and playing over master games are good ways to improve intuition.