How to play against lower rated players

I have been given conflicting advice on how to play lower rated players.  On the one hand, a strong master told me I should play the sharpest tactical opening lines, and try to blow my lower rated opponent out of the water as quickly as possible.

On the other hand, I get this advice from the book Chess for Tigers by Simon Webb.

"Do you know how Tigers catch Rabbits?  Do they rush after them and tear them limb from limb?  Or do the stalk them through the bush before finally creeping up on them when their resistance is low?"


My personal experience has lead me to believe the  2nd approach makes more sense.  When I play complicated forcing moves against my lower rated opponents, I often just put them in a position where they must find the one move that doesn't lose, and they sit there until they find it.  In effect, I am forcing them to play good moves.  When I play less forcing moves (still strong moves, just less forcing) I sometimes give my lower rated opponents more chances to make positional errors that I can exploit later.


Now for the Graphs 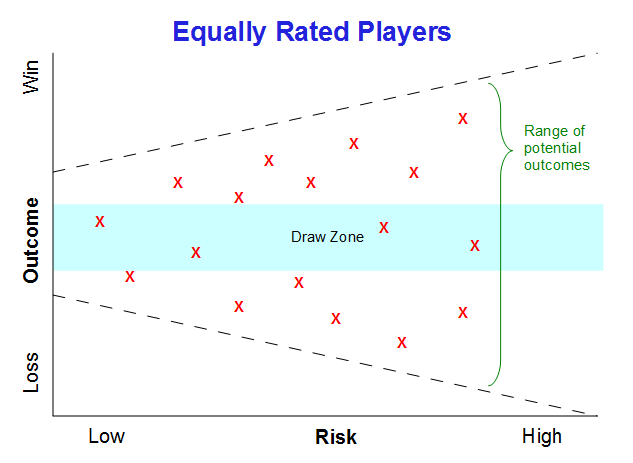 For two equally rated players, I would expect all of the data points to fall between the two dashed lines.  Notice that when neither player takes much risk, a draw is a likely result.  As either player increases the risk, however, the chance of a win or loss increases. 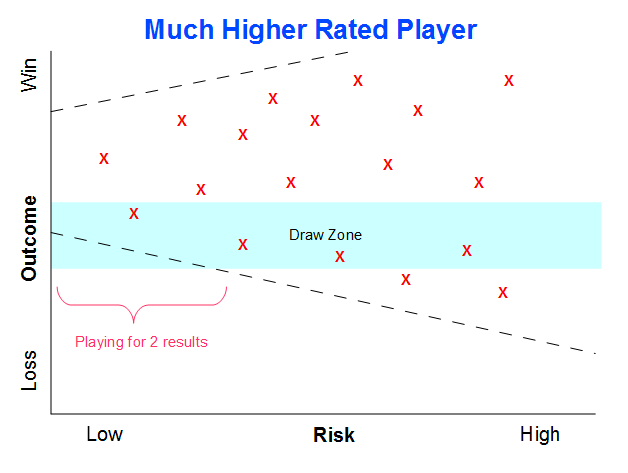 
How to play against higher rated players

Once again, I quote Simon Webb:

"The basic principle is to head for a complicated or unclear position such that neither of you has much idea what to do, and hope that he makes a serious mistake before you do.  Of course you are still more likely to lose than to win, but by increasing the randomness of the result you are giving yourself more chance of a 'lucky' win or draw."


He then gives some pointers for increasing the risk level against higher rated players.  (I am paraphrasing):

My tournament experience has convinced me that this is the correct advice.  Against a lower rated player, I accumulate small advantages and trade down to a winning endgame.   My games may last a long time, but I win a very high percentage of them.  Against higher rated players, I throw everything I have at them, often in a caveman like style, but I have some nice upsets as a result.

In a future post, I will show how I changed my opening repertoire to take this advice into account.